Mechatronics is taking a holistic look at a complete machine solution, taking account of all elements that make up that system that are part of the machine, including mechanisms, motors, drive electronics, controls, interfaces, and ergonomics. A variety of disciplines are involved when considering a machine design utilizing a mechatronic systems approach. It is a melding of the physical expectations of a motion system whether mechanical, electronic, hydraulic, pneumatic or any hybrid of technologies used to accomplish a physical task. Often, these systems are trying to duplicate, simplify, or assist a human function, most often a repetitive motion that a machine can do better. Before mechatronics began to take hold, the mechanical system and the control systems were developed independently of each other with little regard for the components being used. As more computational power became available, specific system modeling began to be employed to optimize solutions.

The discipline of considering the synergy between mechanical, electrical, and control systems has been around since the 50’s, but the term “Mechatronics”, was coined by Tetsuro Mori of Yaskawa and registered it as a trademark in 1971. It was subsequently released for public use.

The adaptation of true mechatronics has a date well before the official release of its name. A book on Statistical Dynamics of Control Systems was published in 1952 by Solodovnikov. A part of this book described how an electronic amplifier was fed an error signal and a gimbal mounted radar was used to track missiles. The papers were smuggled out of the old Soviet Union and were pretty advanced at that time.

Today, most companies that supply motion control systems have been applying these principles as common practice. OEM’s who desire to mix motion elements from multiple suppliers tend to have the mechatronic skills to successfully integrate.

Mechatronics engineering intent is to remove “trial and error” from the process of development. One byproduct is a complete mathematical understanding of the properties of a given machine. System modeling, vibration analysis, and other analytical methods, utilizing state of the art feedback sensors can collect, analyze, and predict failures which leads to preventative maintenance schedules. As a simple example, data collected over time on certain running currents can detect if the mechanical system is wearing excessively if the running current is trending upward above a target range. Many systems are designed to utilize motor sensors in conjunction with control algorithms to establish alerts and warnings based on specific feedback data and prescribed limits. The setup is usually contained within the system control elements. When a machine design takes into account the interaction of its various mechatronic elements, the machine can be optimized for best performance, longest life, and improved OEE.

Most engineers graduate with a degree in either mechanical or electrical engineering. Educational institutes teach the mechanical and control systems separately from each other, instead of as a combined discipline. The separate disciplines naturally combine in the “real world” outside of the educational environment. More and more schools at a variety of levels are instituting degrees tied to Mechatronics throughout the United States and other countries around the world. Mechatronics Engineering as a discipline is becoming more prevalent at a variety of Universities as a discipline within Engineering departments. Many technical and trade schools have embraced Mechatronics. Additional advances will come as increased computational power and sophisticated feedback sensors combine to adapt to a variety of machine conditions. Eventual connectivity to IoT will allow a machine operator to receive maintenance warnings via a smart phone and web connectivity to diagnose machine problems from remote locations.

There are several performance requirements that must be considered when selecting a stepper... 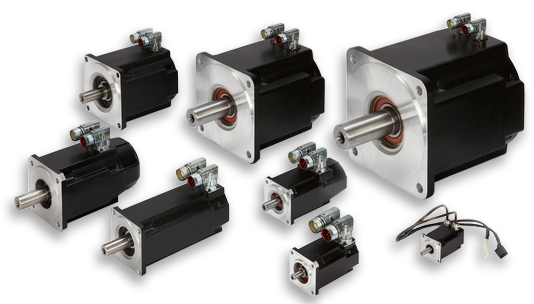 How to Select a Servo Motor

There are several considerations when selecting a servo motor for a specific application, such...