To get the casting die oscillating 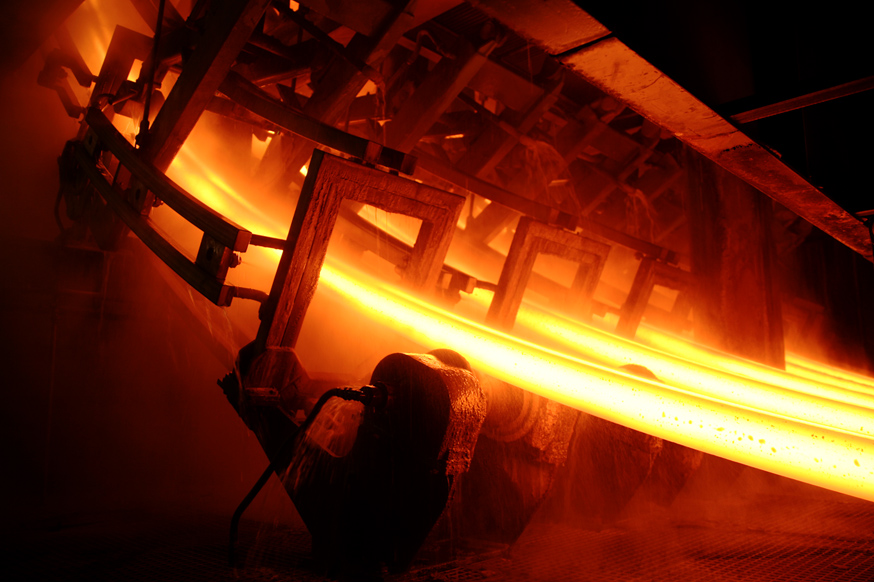 Billet, bloom, slab: Shape is given to the molten steel by the casting die in continuous casting. The casting die can be compared to a mold made of water-cooled copper in which targeted extraction of heat causes the steel to form an outer skin – at first as delicate as a raw egg. So that the freshly formed strand shell does not adhere to the copper wall during this process, the casting die oscillates along the casting plane. An oscillation mechanism helps with this. For the operation of these oscillation mechanisms, SMS Concast developed an electromotive solution with direct drive in an intensive co-engineering process with KOLLMORGEN. CONDRIVE is based on winding-optimized KBM motors – and has what it takes to revolutionize the form process in continuous casting.

Continuous casting represents the second revolution in steel production, after the discovery of the oxygen steel-making process. The discovery of the oscillating casting die was ground-breaking in the economic success of the process, explains Dino Kabosch, technology developer at SMS Concast AG: The Zürich-based company has been inextricably linked with continuous casting, more or less from its inception. It was Irving Rossi, steel pioneer and father of strand casting, who founded Concast AG in 1954. The SMS Group, to which Concast AG now belongs, achieves a global annual turnover of approx. three billion euros.

Nothing is allowed to adhere

With CONDRIVE, SMS Concast has brought a solution onto the market which makes the oscillation of the casting die more effective and easier to regulate. The basis is formed by the direct drive technology from the KBM motor kits by KOLLMORGEN. A technically demanding joint phase of engineering took place beforehand. The result of this was the development of a drive solution which could create highly flexible oscillation profiles. The current electromechanical drive systems allow the frequency to be regulated online alone, while the amplitude is provided by the mechanical system.

The significance of the patented process will become clear when taking a closer look at the continuous casting process. The molten steel is delivered in batches in pans to the strand casting system. The steel, under the exclusion of air, flows from the pan into a tundish. This tundish is there is distribute the steel into different strands and also to act as an interim buffer when changing pans. The steel is dispensed via the tundish into one to eight strands and flows over the control device into the casting dies. This is where the molding process takes place. Either a casting powder or an oil is added to the surface of the molten steel in the casting die. The casting powder or oil, which is melted to a slag, amongst other things has the important task of ensuring lubrication between the strand shell forming on the wall of the casting die and the water-cooled casting die. Because of this lubricant effect and the relative movement between the strand shell and the casting die due to the oscillation, the soft, delicate strand shell does not continue to adhere to the casting die and can be continuously pulled out of the casting die "in a strand".

This area is crucial for the high quality and, above all, operationally safe continuous casting. The oscillation generated by the KOLLMORGEN direct drives must be created with such polished a movement such that while pulling off the strand, there must be sufficient casting powder drawn into the gap between the strand shell and the wall of the casting die to minimize the effect of friction on the strand shell.

In addition to this, the tensile force resulting from the movement profile must not lead to the just-formed shell being torn up again. If this were the case, molten steel would pour out into the system – leading to immediate interruption of casting and subsequent production outage.

As a rule, a sinusoidal oscillation process is employed. What is crucial for this is the time window in which the oscillating, downward-moving, casting die overtakes the steel strand which is also moving downwards, before the forming unit at the lower peak travels back up.

This overtaking process is known as "negative strip time" and defines the time in which the casting powder is able to lie on outer wall of the steel while being pulled off. The oscillating movement of the casting die requires that the fine waves form on the surface of the strand, known as oscillation marks. 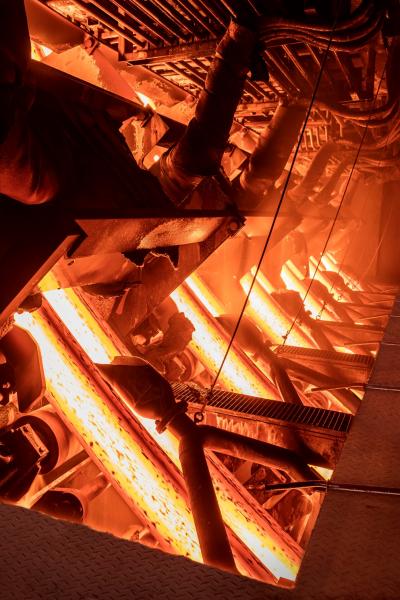 The ideal frequency at which the casting die should be oscillating in the continuous casting and, above all, at which amplitude, depends on factors such as the quality of the steel, the formulation, the production speed or even the casting die form. The negative strip time typically lies in a time window between 0.08 and 0.18 seconds. “If we don't have this time, we cannot continue to cast. Then the entire mechanics fail to function – that is the friction characteristics between the copper and steel,” explains Kabosch, and he likens it to liquid chocolate cake sticking to the baking sheet and, when removed from the tin, it breaks apart. The interplay between friction force or friction coefficient and the ferrostatic pressure, which acts vertically on the inside of the casting die due to the molten steel, is fragile. “At this point, we use the direct drives by KOLLMORGEN,” explains the SMS Concast developer. The transfer of mechanical processes into a software-based Motion Control opens up possibilities of effectively implementing new movement curves and being able to very flexibly and individually adjust the movement to the differing casting conditions.

The particular advantage is that the frequency, the amplitude and the wave form of the oscillation can be changed. The amplitude is crucial for distance covered within a time window. “Converting a mechanical eccentric shaft for this is only possible during shutdown and takes a long time,” notes Dino Kabosch. Also compared to hydraulic drives for oscillation, the CONDRIVE scores highly since the actuator solution does not require a hydraulic infrastructure and also comes with significantly lower maintenance costs.

The torque motors specially adjusted by KOLLMORGEN to the needs of this application originate from the KBM kit. In the 118 installation size, the drives deliver torques of 660 Nm and a peak torque of 1000 Nm. The drive is thus in a position to precisely get the oscillation bulk, weighing between 3.5 and 7 tons, into oscillation. On the control side, SMS Concast also opts for KOLLMORGEN – in this case in the design of the S700 servo amplifiers. 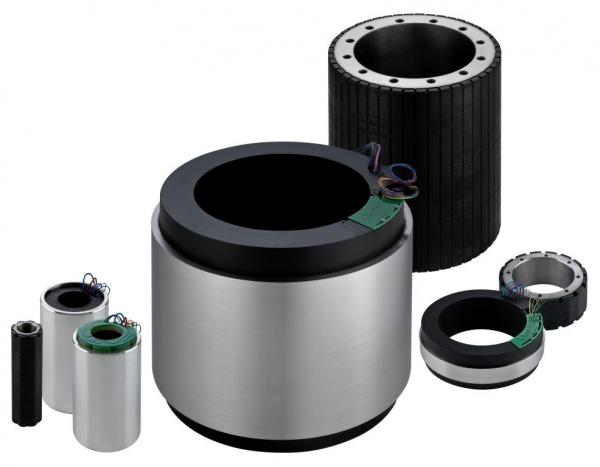 What is unique about the production of oscillation is the fact the oscillation is not generated by a revolving eccentric shaft in a rotative continuous operation, but by the recurrent reversing motions of the motor. What may seem simple at first glance, has brought about very demanding challenges for engineering. The constant reversing leads to questions such as how the heat loss is effectively diverted. Other questions relating to lubrication also emerge.

Since the motor is no longer making complete revolutions, the grease for standard lubricated-for-life bearings is inevitably suppressed by the rolling elements. The effect of the lubrication is thus no longer guaranteed.

Finally, these three basic conditions have contributed towards KOLLMORGEN equipping the KBM motor with a water cooling system so that the heat loss can be effectively diverted. For the long-term effective lubrication of the few bearings of the gearless direct drives, stators and rotors are completely enclosed in an oil bath – which ultimately also securely protects the encapsulated unit against metal dust.

Another advantage results from the eradication of the drive – namely with an eye on continuous condition monitoring of the system and processes. By the KBM motor driving the process without the influence of disruptive gear effects such as play or friction, this ensures an extremely precise control of processes while also very directly and precisely monitoring the process due to the motor data. It is above all key motor data such as power and revolutions which allows the processes to be precisely analyzed – up to and including the incorporation into IoT systems.

“The work has been worth it” – with regard to the findings garnered from a continuous casting machine at Swiss Steel AG, Dino Kabosch is delighted about this new oscillation process. “Two years of development have gone into this – the CONDRIVE is operating very well. Almost too well. We are still looking for faults in the mechanics, but we can't find any. It's a great feeling.”

Currently, CONDRIVE is being developed into a sought-after series product which, thanks to its simple integration and high availability, is very well suited to the modernization of existing continuous casting machines.

Contracts in Spain, India and China mark the success of the solution with the actuator direct drive technology by KOLLMORGEN inside.

With CONDRIVE, SMS Concast has developed a system which, due to the encapsulated direct drives from the KBM motor kit by KOLLMORGEN, is virtually maintenance-free. The innovation offers an excellent precision for controlling the oscillation of the casting die. In contrast to the other drive systems for oscillations (including hydraulic booster cylinders), CONDRIVE combines a simple design with online settings and monitoring of the oscillation curves.

Since the company was founded in 1916 the innovative drive solutions from KOLLMORGEN have been responsible for putting some great ideas into practice, making the world a little safer and improving quality of life. KOLLMORGEN allows pioneering solutions to be continuously developed that are unrivaled in terms of performance, reliability and user-friendliness. The crucial factors with this are first-class knowledge and expertise related to drive systems and components, industry-leading quality and extensive professional expertise related to connecting and integrating standard and custom-made products. This gives mechanical engineers globally an important competitive advantage and gives their end customers the reassuring feeling of being able to rely on the completed application at all times. – Further information: www.KOLLMORGEN.com | [email protected]LMORGEN.com.

© KOLLMORGEN. Use for editorial purposes free of charge. 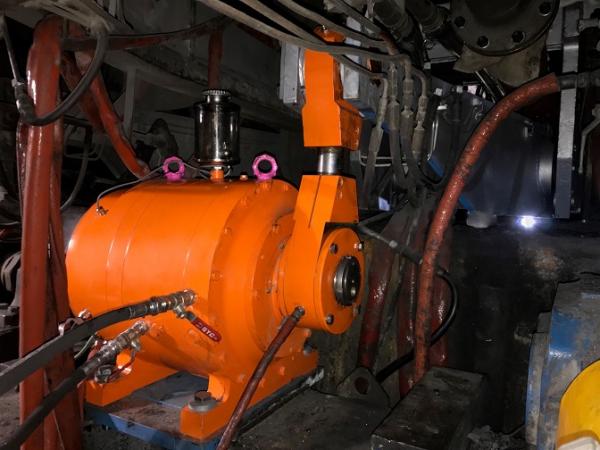 CONDRIVE by SMS Concast AG is developing into a sought-after series product: simple integration and high availability are very well suited to the modernization of continuous casting systems 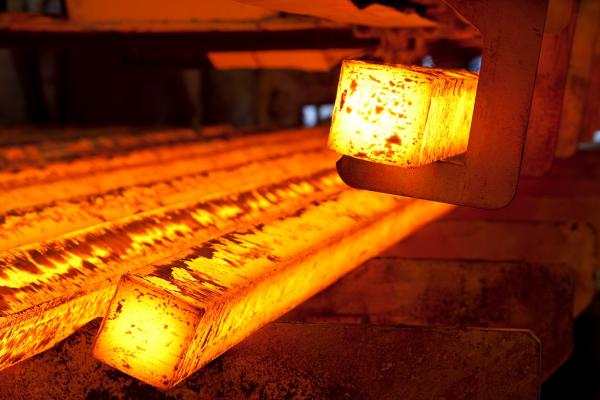 A view into the cooling chamber of a continuous casting machine 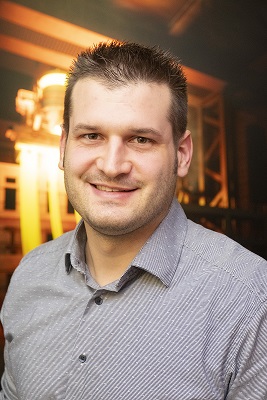 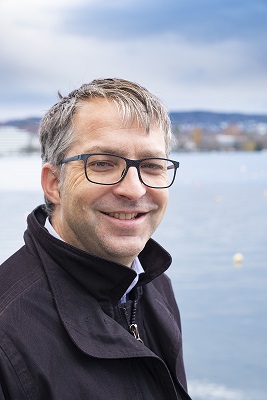