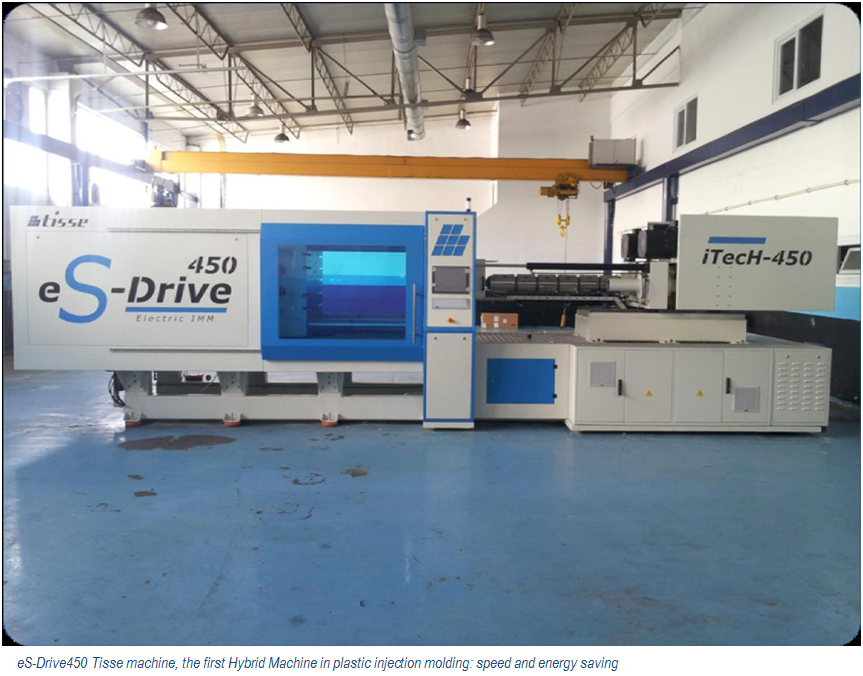 First in Turkey in the field of Plastic Injections, Tisse and Kollmorgen have together developed an electric-hydraulic Hybrid Machine. The Hybrid Machine can manufacture difficult and sensitive products at high speeds; its power and quality eliminate problems like ejection errors and high quantity of wastage. It also increases the production rate and provides energy efficiency up to 35-40% compared to the competition.

eS-Drive450 Tisse is the result of the cooperation between Kollmorgen engineering and Tisse Plastic Injection Molding Machines Company. It is the first hybrid plastic injection molding machine, whose injection part includes an electric system and a hydraulic system

comprised of clamping and conveying as well as an ejection unit. The hybrid design provides speed and energy saving in manufacturing. The entire software of the machine was written by Kollmorgen, in house, from scratch. The injection part of the hybrid machine consists of 2 servo motors, whereas clamping, conveying and ejection parts form the hydraulic system. However, because the pump of the hydraulic system is driven using servo motor, the machine may be called a full electric hybrid. The reason why servo motors were used in the injection part was to provide crucial acceleration and sensitive pressure balance, making it easy and quick for the liquid plastic to be injected in to the mold. Speed is of great importance especially for molding thin-walled packaging products. For instance, because products, such as the lids of yoghurt pots cool very quickly, the process is required to be completed immediately. Seref Karaoglan, project manager of Kollmorgen Turkey, speaks about the machine performance: “We often witness that manufacturers have difficulty in manufacturing such products. We designed the hybrid not only to provide energy efficiency but also to increase speed. People think it is not easy to manufacture such machine because, for instance, we apply 10 different speed stages and 10 different pressure stages in accordance with the type of mold in order to make a movement of 90mm (P/Q). It is really not easy to do this just with any servo motors but we used Kollmorgen’s S600 drives and AKD PDMM controllers. ” Omer Sengelen, Production Manager of Tisse Machine, summarized their position in the sector: “We are endeavoring to add remarkable features even to typical machines. Actually, we quit manufacturing injection molding machines in 2000. In 2008, however, we noticed that there was a need for blow molding machines and we started manufacturing again. With the expertise and high product quality that we developed through our partnership with Elsim Kollmorgen, we have become capable with very high-level injection molding machinery. 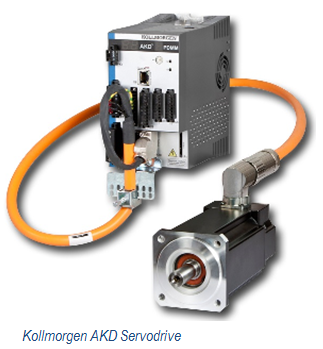 ”Clamping systems in normal injection molding machines are usually problematic. The injection molding might be fast but the clamping is the negative side. The compression ratio is less, but they cause great expenses at high speed. The clamping part in hydraulic injection machines is always as per specifications, but complaints about the injection speed predominate. Their maximum speed is between 100mm/h and200mm/s. This hybrid machine has the best side of those 2 systems. While it enables the clamping and other parts of the machine which require power to run fast, it is also able to reach a speed of 300mm/h by getting the injection system to work with servo motors. In addition to these advantages, it provides energy saving in the pump of the hydraulic system by using servo motors. Project manager of Kollmorgen Turkey, Seref Karaoglan says, “The reason why electric machines are liked is that they are energy efficient unlike AC motors, in the hydraulic part of old machines, that keep cycling even while the machine is off and consume energy even if you do nothing.”

Special Valve Technology
Regeneration is provided through the special valve used in the hydraulic system of the machine. Suppose that the grease taken from the tank and injected into the system, supplies 100 units of energy in the classical systems. Thanks to this valve, the grease coming out of the system is re-injected into the system, instead of transferring it into the tank. Thus, you obtain extra power up to 60%. According to Seref Karaoglan, you get extra speed as well as extra power, and “It is like the generator of a car charging the accumulator. We could have used standard valves for the clamping parts because we had acceleration in the injection part. But thanks to this special valve, we use the clamping system as if it is electrically operated, and increase the speed thanks to regeneration.”

Parallel Power through Two Different Motors
Another stellar feature of the machine is that 2 different motors are used in the injection process, getting parallel power through each other. The motors are connected by very special screws that run synchronously. These screws enable the motors to cycle with high-precision in less than 1/10mm, and they provide stable running even at high speed.

Efficient Communication System
The speed doubles because the injection nozzle in the machine is pushed and pulled by twin motors. Seref Karaoglan says, “Kollmorgen communication systems allow the synchronous work of two motors on the same mechanical system but running independently. If one of the motors runs at a speed slower than1/10mm, it might damage the screws, which are very special and expensive. The communication time and synchronization of the motors takes less than 1 m/s.

High-Tech Braking
The motors used in the machine are quite heavy and powerful. “We took all kinds of measurements in the event of any communication problems between each other. 6.5kW of braking resistance is used in the system because the flywheel effect comes out while the screws and balls gain acceleration.” Seref Karaoglan also points out that it gets really difficult to control the speed and says: ”The products we use here are those developed by Kollmorgen and include plates providing stepped braking. It would have been impossible for me to succeed in this project with standard braking resistances.”

Special Pump Software
There are 2 important elements in grease-powered systems: Speed and Pressure. The software developed for this machine, ensures the desired pressure at the desired speed. Seref Karaoglan says. ”We can use 10 different PQ distances. We are also using this advantage on the clamping system. Thanks to the servo motored pump software, we reach the desired speed within 150-200ms and despite this speed we provide the desired pressure on an error band of 2 or 3 bars.” 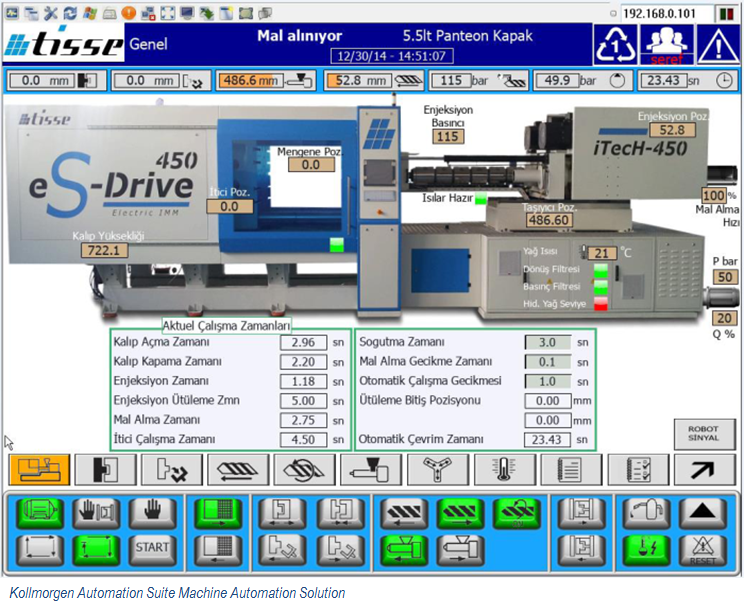