AKD2G Drives in a KAS - PCMM or PDMM Based System

The AKD2G can be used in a KAS Motion/Machine control system with PCMM controller or PDMM controller/drive . This application note outlines new/different features to be cognizant of when developing a KAS application that includes  AKD2G drives. After reviewing this document, contact a KAS application engineer if you want more detail. 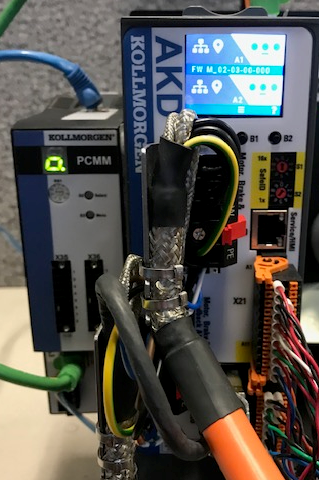 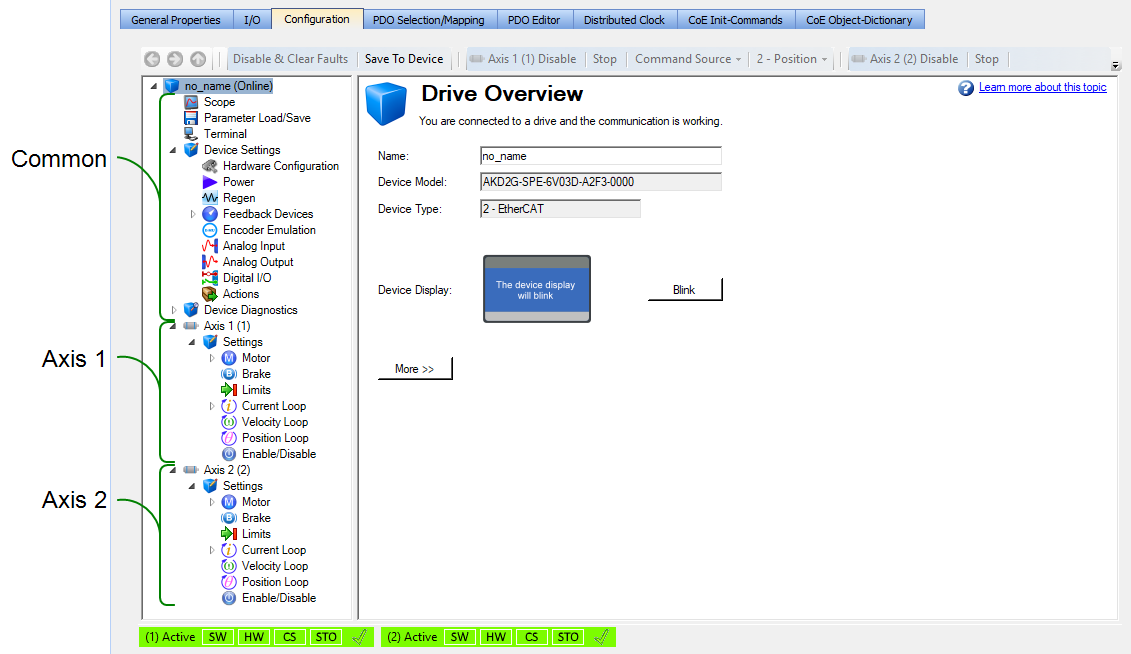 In the Workbench terminal window, which provides direct access to AKD2G parameter values in a concise format,  note that many AKD2G parameter start out with an additional identifier to define the specific axis “Axis1” or “Axis2”  before the <parmeter group name>. <specific parameter> it is assocated with.
Example The velocity loop proportional gain in the AKD is parameter VP.KP, in the AKD2G it is AXIS1. VP.KP or AXIS2.VP.KP 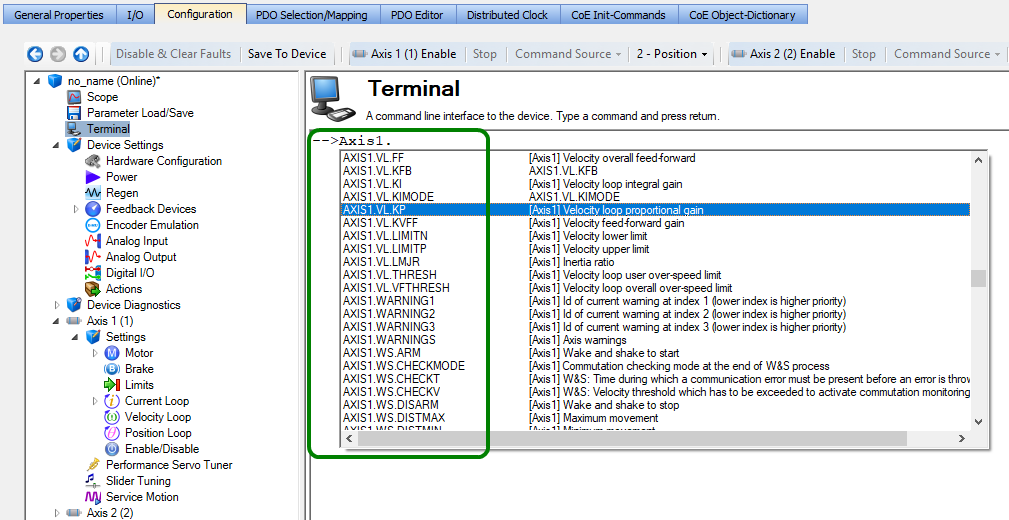 AKD2G has up to 5 five independent feedbacks that can be assigned to the axis. Here is the WorkBench Screen: 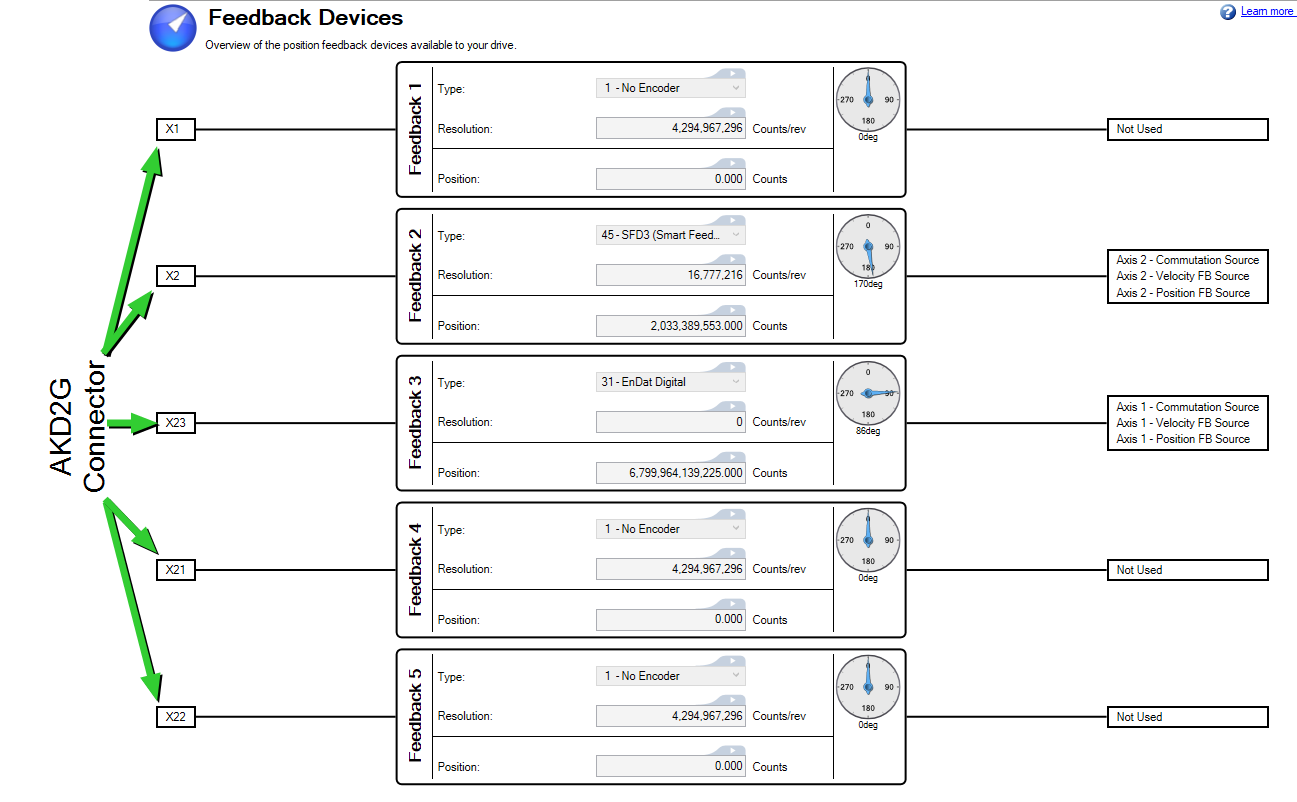 The usage of the five channels may be freely configured in the Workbench software, subject only to a few restrictions that are not physically sensible. 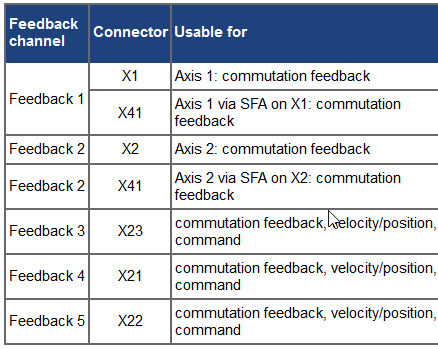 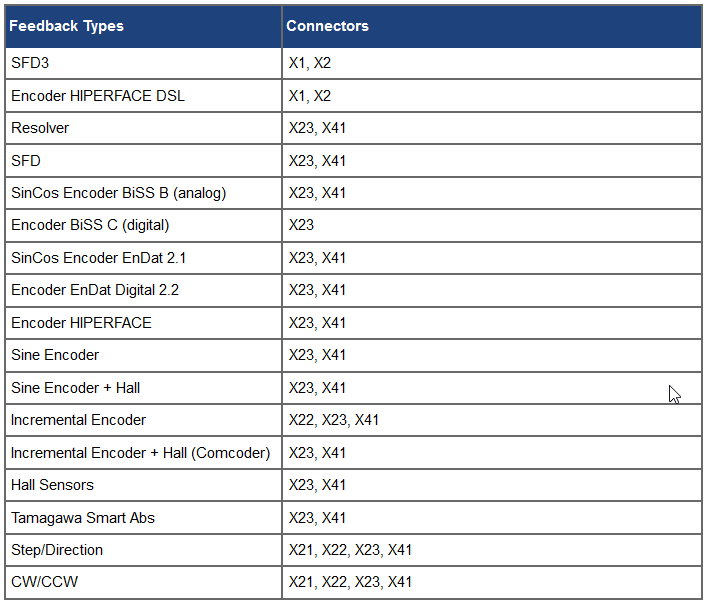 Feedback X1 and X2 only support 2 wire digital feedbacks types: SFD3 and HIPERFACE DSL.  By default, each axis is assigned to feedback X1 or X2, for axis 1 and 2 respectively. To accommodate  legacy feedbacks there is cable adapter SFA (P/N AKD2G-CON-SFA-000) that will plug into connector X1 or X2’s 2 wire port. On the SFA’s other side there is a 15 pole HD SubD female connector X41 that then will plug into Kollmorgen legacy feedback types (cables).
The SFA (Smart Feedback Adapter) converts conventional feedback signals to a 2-wire serial signal. SFA can be laid into the cable duct or may be mounted to a DIN rail using a standard DIN rail clip.

Connector X1/ Connector X2
There is also a limited support for feedbacks on the X21 and X22 connectors for feedbacks 4 and 5 that provide inputs for step and direction, A quad B incremental, and clockwise/counter-clockwise type feedback control.
Note that available connectors will depend on the drive model ordered.

Note: AKD2G options allow for 2 or 3 additional feedback devices for master encoder signals and other application needs to be incorporated into the AKD2G/ KAS system.

Feedback 1 and 2 are scaled by the following COE Parameters: 0x6091h,0x6092h,0x6096h, and 0x6097h.  Some are in the KAS COE Init parameters which sets these parameters when the Ethercat Network is Initialized:

Feedback 3,4, and 5 are scaled by the following COE Parameters: 0x60E8h, 0x60E9h, 0x60Edh and
60EEh. These can be added to the KAS COE Init parameters or using the ECATWriteSDO function blocks. Additional Feedback is possible through 60E4h.

The feedback data is sent back to the control through the deterministic EtherCAT PDO channel, the objects used are:

Things worth noting about the high-speed capture functionality in the AKD2G:

For the AKD2G, the COE Init Parameters sent from the controller to the drive on Ethercat initialization have the following changes, some to line up with the DS402 standard:

For reference here are the AKD Parameters COE Init Parameters 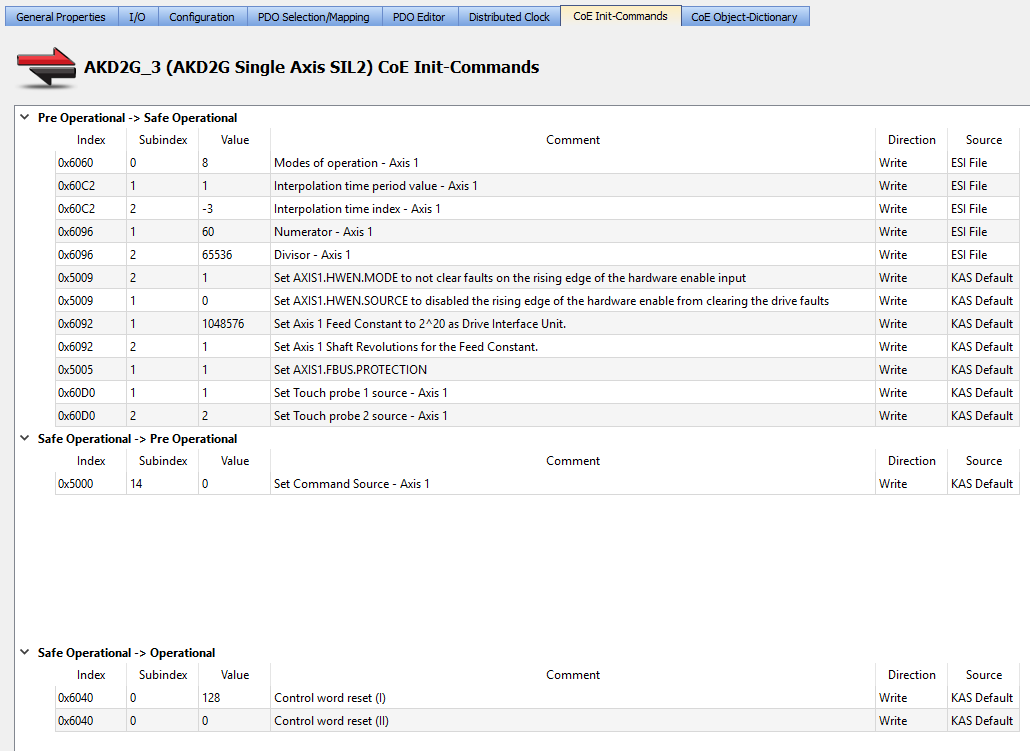 The green bracket is related to Axis 1

The blue bracket is related to Axis 2 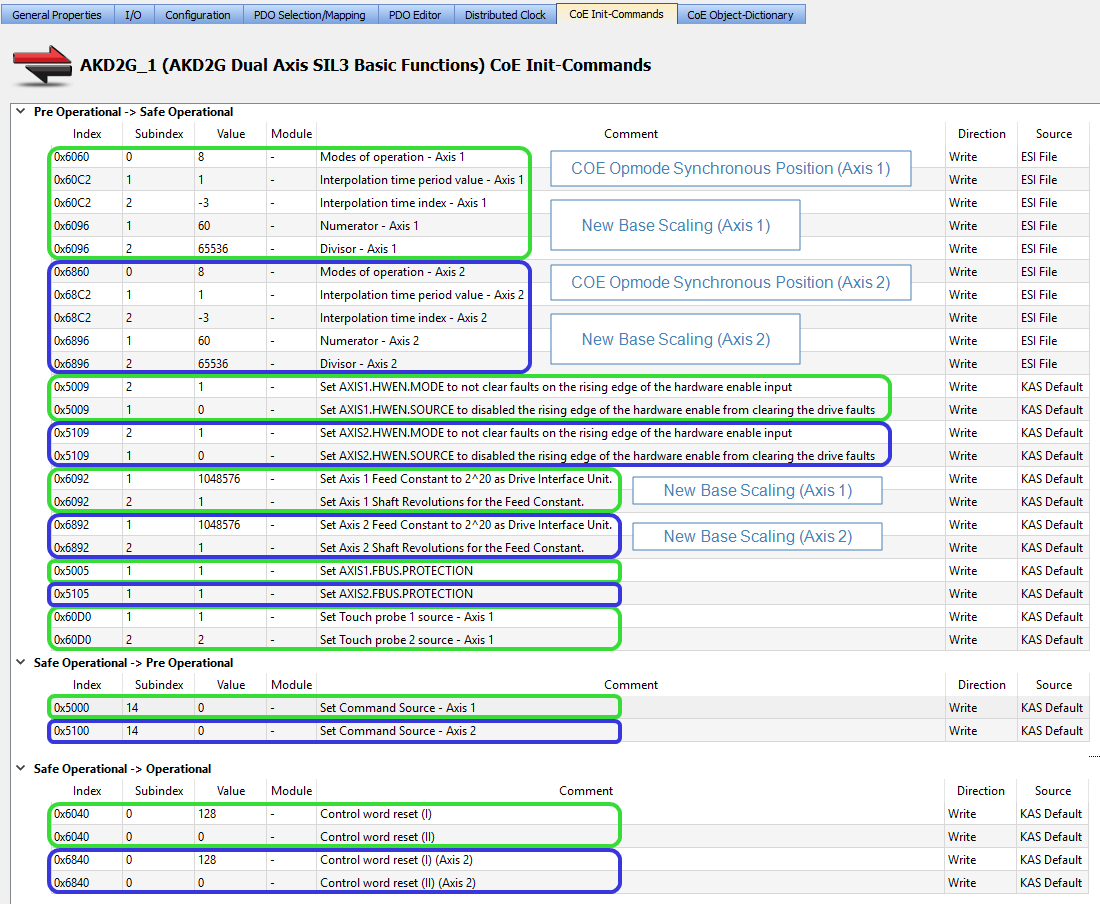 The AKD2G  may contain COE Init commands for the Drive Digital Outputs:

In the AKD2G base model model some of these will not exist and must be removed from the COE init parameter list. If not, you may see the following errors when starting a project in the IDE controller log.

Originally the KAS application failed to startup when the EtherCAT network contains an AKD2G single-axis drive without X22 IO option. At Ethercat init,
KAS write to AKD2G output configuration that included DOUT5.SOURCE, DOUT6.SOURCE, DOUT7.SOURCE, DOUT8.SOURCE, AOUT2.SOURCE.
If the AKD2G has no X22 IO option (e.g. AKD2G-SPE-xVxxS-A100-0000)  SDO errors occur because this single axis drive model don't have all the outputs.
This prevents the Ethercat to start and reports a E33 or E31 error. Starting with version 3.07.0.87516 patch 1 the CoE init commands configure the
digital and analog outputs on X22 connector are now included only if the AKD2G model has the X22 IO option.

PDOs are the parameters(objects) that are passed cyclically between the EtherCAT Master (PxMM) and EtherCAT Drives (AKD2G). Changes to the standard objects (from AKD) are to line up with the CoE DS402 standard specification, to add objects for a second Axis (for AKD2G dual axis models only), and add safety related objects.

The green bracket is related to Axis 1

The blue bracket is related to Axis 2 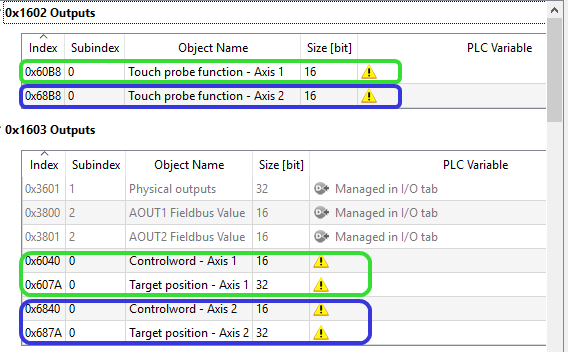 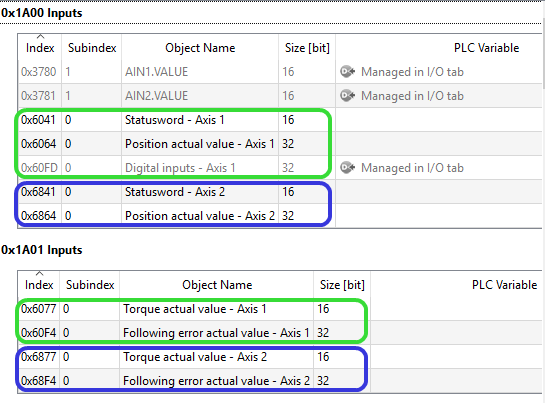 As part of the AKD2Gs enhanced connector system the AKD2G Ethercat connection to the PxMM is on the top face. This facilitates more orderly wiring. 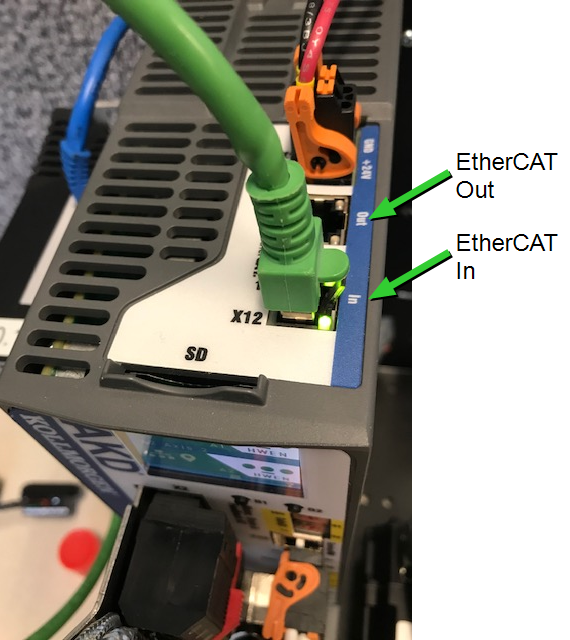 The AKD2G has more information available on the drive’s front face display. This direct information from the drive is accessible without any other software program (Workbench or the IDE)

User Units Consistency (between the IDE and Embedded Workbench)

With the PxMM/AKD2G system, application units on the controller side defined in the PLCOpen Axis Data screen (with PLCopen motion)and PN Axis setup screen (with PipeNetwork motion) are now incorporated in the drive’s WorkBench screens. When a project is started up, either through the IDE or PxMM powerup, the controller side setup units are automatically transferred to the drive side. Example below shows setting up units of mm in the IDE axis setup screen carries through to the embedded WorkBench screens such as Scope and Limits: 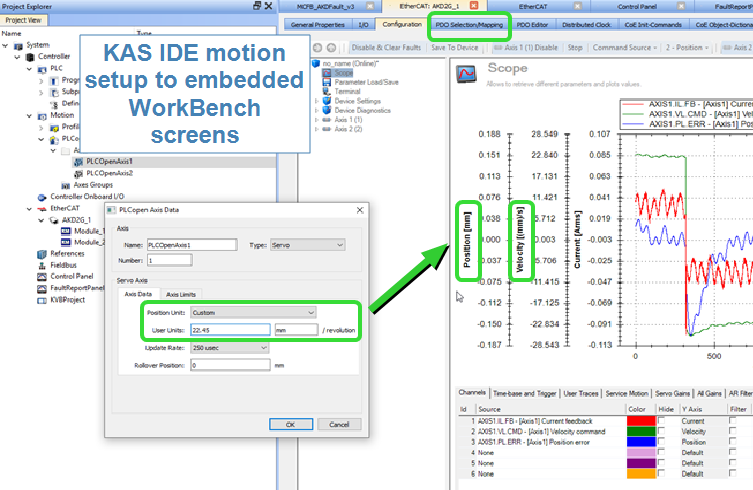 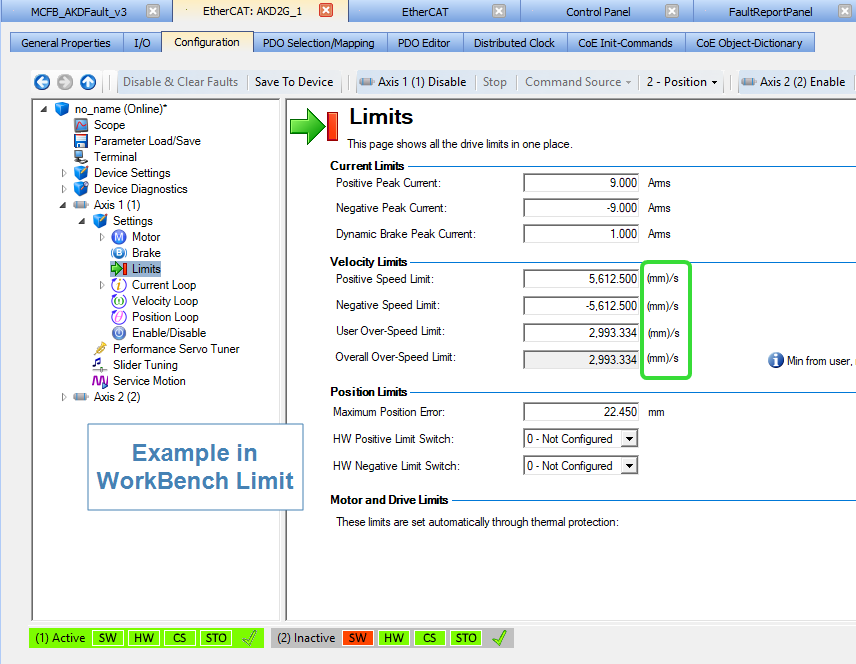 KAS version 3.03 will support the transfer of safety information from the AKD2G with SMM options #2 and #3 (available later this year) to and from a Master Safety Controller. In the PxMM, during Ethercat scan/discovery, the AKD2G default safety module profiles will be automatically added to the AKD2G device in the KAS IDE project tree. 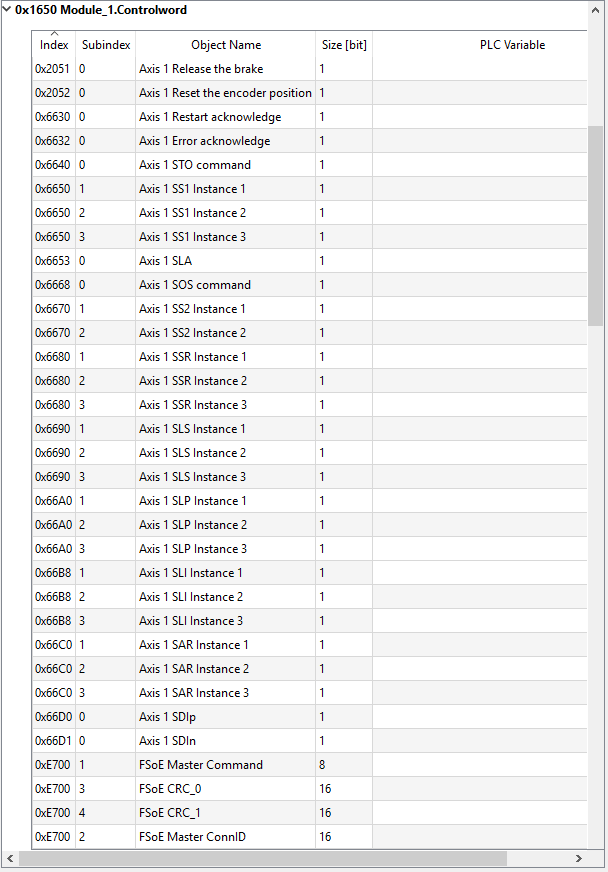 In the KAS IDE project tree, an FSoE/PDO Selection tab has been added to the EtherCAT section. FSoE stands for Fail Safe over EtherCAT.  This facilitates using a separate Master Safety controller to then set up and incorporates the AKD2G’s safety parameters or objects.  The tab below displays: AKD2Gs safety Input (Tx) and Output (Rx) PDOs and associated safety functionality. 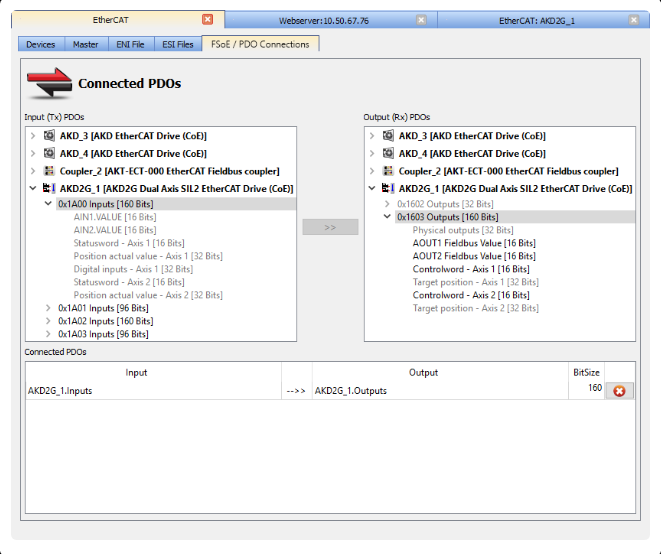 During machine operation, the PxMM runtime will copy the data between the connected PDOs. This makes it possible to transfer safety-critical process data via EtherCAT frames between the AKD2G and the Safety controller. The FSoE protocol, communication, and state machine are handled by the external EtherCAT Safety controller.

The AKD2G introduces an Action Table to configure certain tasks to run when certain events occur in the drive. Action Table replaces and extends the AKD1 digital input and output modes. This means the KAS program can use the table to configure certain actions instead of programming in the controller side. Example tasks include setting a digital output and initiating a controlled stop. Example events include detecting a level transition on a digital input comparing velocity feedback to a threshold. The AKD2G drive may be configured for up to 32 actions. Each action is defined by a set of parameters whose names identify the action (ex: ACTION#.TASK). WorkBench provides a new Actions interface screen that can be used to configure all actions on the drive.

The AKD2G contains more I/O. This could eliminate the need for AKI remote I/O is applications with limited IO needs 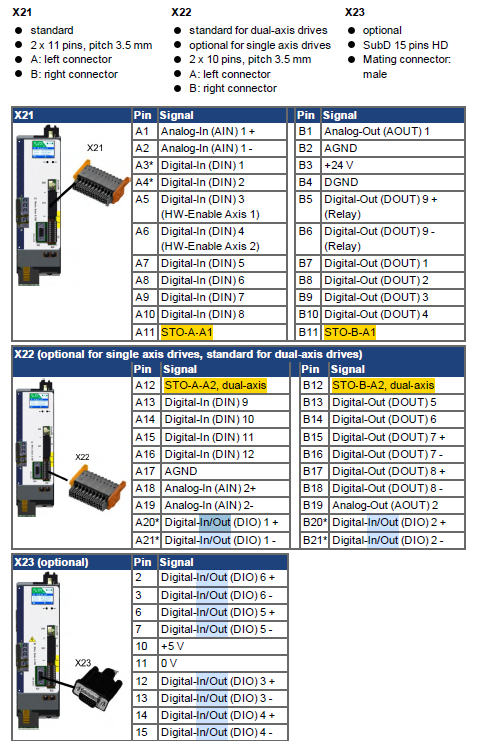 AKD2G Safe Motion Options #2 and #3 will be available in the second half of 2020, and include  I/O point dedicated for safety connections. 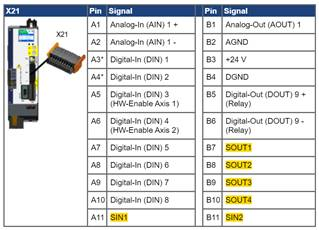 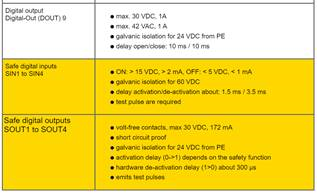 The Safe Inputs require a test pulse and the Safe Outputs generate a test pulse. Test pulses is what makes the difference between a safe I/O verses a non-safe version, gives that extra safety check to make sure the wire connection is still there. 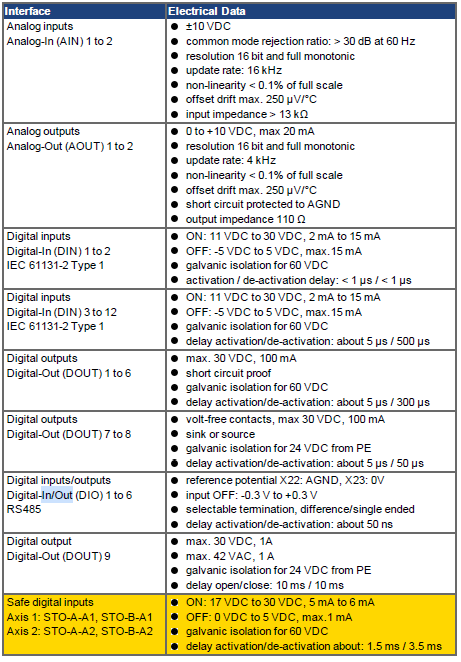 The fault codes in the AKD are 4 digit long. Th fault codes on the AKD2G are 5 digit long and will be a different number. Example:
Bus Under Volts fault: 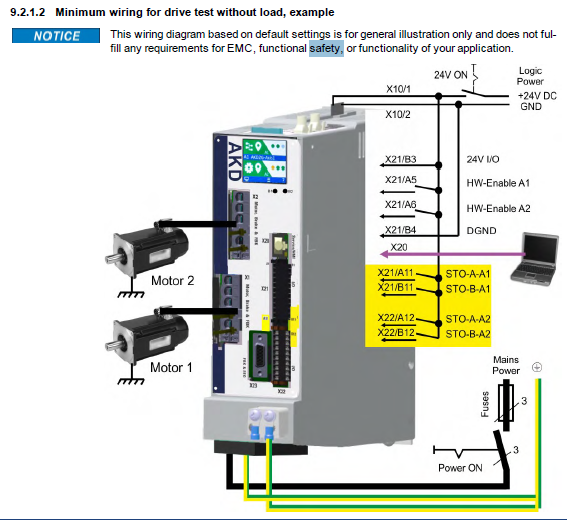 Note:  For the minimal wiring that does not necessarily meet any industry standards the  HW-enable signal requirement can be reset by changing the HW enable source to none:

Note: the default AKD2G disable mode is to control stop then disable instead of disable immediately. This puts the axis is control stop state that has to be cleared whenever the drive is disabled. To prevent this the Disable mode can be set to " 0 - Disable Axis immediately".

To accommodate the availability of the AKD2G dual axis models, many keywords have a “AXIS1.” or “AXIS2.” suffix. Examples:

Some that were not axis dependent have the same key word. Examples:

Some of the DRV parameters which are axis dependent now start with “AXIS1. “ or “AXIS2“. instead of “DRV“. Examples:

With version 3.07 IDE release , the fault monitoring (Program: FaultMonitor) for monitoring drive faults has been updated and now works all of the following drives:  AKD, AKD2G, AKT2G Stepper, and S300/S700. The program FaultMonitor calls the subprogram MCFB_DriveFault which determines which drive type has a fault, then sends fault information to the fault report panel. 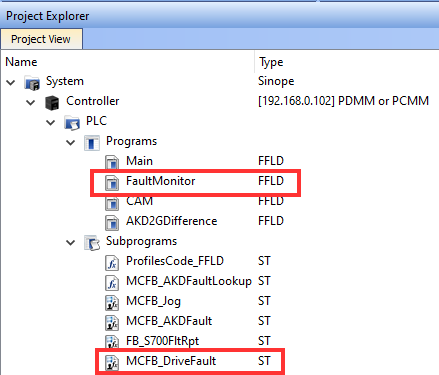 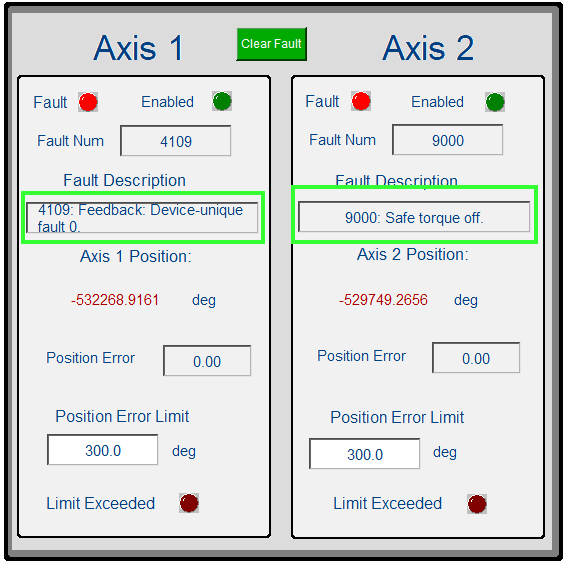 In subprogram MCFB_DriveFault  there is a section of code focused on theAKD2G. Shown below  is the section for Axis1. In a dual axis AKD2G the code for Axis2 directly follows in the  MCFB_DriveFault subroutine (not shown).

In the AKD2G Online documentation, there is a section on AKD2G vs AKD: