In a TN system, the neutral point of the transformer supplying the power is earthed. Grounding is performed at this neutral point. TN Systems are subdivided into TN C Systems, TN C S Systems and TN S Systems according to the design of the protective conductor.

A PEN conductor which is both a protective conductor (PE) and a neutral conductor (N) is used in a TN C System.

Since current flows across a neutral conductor when the outer conductor is unevenly loaded, a voltage is usually present between the conductive housings of equipment connected to a PEN conductor and the earth, which is generated from the conductor's resistance according to Ohm's law.

A TN C System can only be used for conductors with a cross-section of at least 10 mm² copper or 16 mm²  aluminum. This limitation has been put into place in order to keep the risk of interruption to the PEN conductor to a minimum. No such protection is in place for older installations with a smaller cross-section.

Residual Current Protective Device may not be used in a TN C network, since a neutral conductor which is separate from a earth conductor is required in order to guarantee their proper functioning. 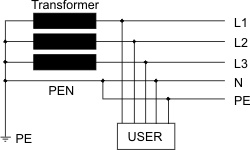 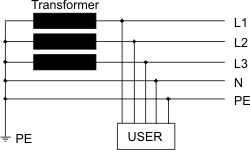 In a TN S System, separate neutral conductors and protective conductors are channeled from the transformer to the consumables.
A TN S System is safer than other TN Systems.

The problems caused by an interruption to a PEN conductor do not occur here, as protective measures are completely secured. The system is used predominantly in large industrial systems which are typically supplied with medium voltage and are equipped with their own transformers. 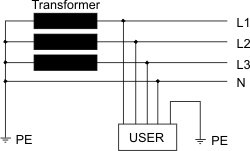 In a TT System, the neutral point of the transformer receiving the power is earthed in the same way as a TN System, however the protective conductor connected to the electrically conductive housings of other equipment is not channeled to this neutral point, but rather is earthed separately.

The protective earthing measure can be problematic however, since the rapid activation of the overcurrent protective device requires extremely high currents, which in turn require the lowest possible earthing resistances. If stronger electric circuits are required, it will be necessary to resort to a Residual Current Protective Device. The strength of the release current is also dependent on the earthing conditions where the residual current protective circuit is concerned. 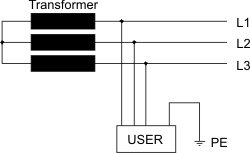 In an IT System, the conductive housings of the equipment are earthed in the same way as in a TT System or a TN System, but the neutral point of the transformer receiving the power is not.

A single insulation failure between an outer conductor and an earth conductor represents the earthing of this conductor. Following this, neither a dangerous contact voltage between the conductive housings and the earth nor an earthed electric circuit to the transformer are present. Due to the resulting voltage rise in both "healthy" phases, however, it is essential that they have appropriate insulation. This should eliminate the failure within a few hours.

In the case of an IT System with insulation monitoring, the resistance of the outer conductors and the neutral conductor to earth is continuously measured by an insulation monitoring device, which reports failures and triggers a shutdown of the affected non-essential units. A further short to earth of one of the other two phases represents a short circuit, which is disconnected via the monitoring devices. This makes an IT System fail-safe and thereby considerably more reliable.

This type of network is used, for example, in medium-voltage networks present in auxiliary power plants and in hospital operating rooms.