Incremental Encoders provide incremental motor position information via two channels, referred to as the A Channel and B Channel. These channels output a specific number of pulses for a unit of shaft motion. These pulses are typically generated within the incremental encoder using an optical disk directly connected to the motor shaft. The disk has etchings on it that either transmit or block light passing through the disk. An optical transmitter and receiver sit on either side of the disk. The rotation of the disc (and motor shaft) interrupts light transmission from source to receiver, creating pulses. The interruptions on the disk are called lines and result is the encoder's rating of lines-per-revolution (LPR), sometimes referred to as pulses per revolution (PPR).

The most popular of the encoders is the incremental TTL (transistor transistor logic output) type. The output is a digital pulse train with varying resolutions. Encoder resolutions of 50 - 5,000 LPR are standard from most vendors. Special line counts up to 100,000 are also available. Encoders provide A, B & Index or Reference signals.

The incremental encoder output can also have a complement signal. The complement signal aids in noise immunity. By detect the rising signal, or more positive going signal, the encoder resolution can be increased by a factor of 4. For example a 1024 line encoder with complementary, or quadrature output, has 4096 counts per revolution.

The two channels provide the same information (pulses per unit of motion), but have an electrical phase shift of 90º between each other. The 90º electrical phase shift between the two channels is referred to as "quadrature encoded." Hence, the term "A quad B." The encoder output appears as a frequency, but the pulse rate is dependent on the motor's rotational velocity, not time. Since the two channels are phase-shifted by 90º, there are actually four states available per electrical cycle of these signals. The complementary output signal is shown below. 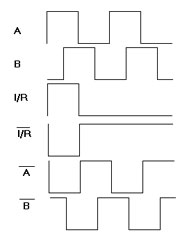 The controller is able to receive four counts for position feedback for one line of motion of the incremental encoder. The actual decode of the four position counts-per-line of the encoder is called "quadrature decode." Since the encoder signals A and B are phase shifted by 90º, it is easy to design electronics that recognize whether A came before B or B came before A, thus supplying directional information. It is also easy to calculate velocity by differentiation: dividing the number of pulses per unit time by the time.

Incremental Encoders are often provided with an additional channel called a Marker channel, Zero Pulse, or an Index channel. These are merely different names for the same function. This channel outputs one pulse-per-revolution and is typically an extremely narrow pulse equating to roughly ¼ of the width of an A or B channel pulse, but can be wider. This is a reference position marker used for homing (absolute position reference) and commutation alignment.

One challenge when using incremental encoders for commutating a brushless motor is that they are incremental devices rather than absolute devices. At power-up with an absolute device (such as a resolver), the device transmits a code that is unambiguous to any position within its rotation. In other words, at power-up, the system knows the position of the motor shaft.

Incremental Encoders are incremental devices, meaning that there is no way to know exactly the position of the shaft at power up, only how far it has moved from its original position. This presents a problem with three-phase brushless motors in terms of commutation alignment. It is extremely important to establish the appropriate commutation angle within the controller. (Commutation refers to the alignment of the electromagnetic field to the permanent magnet fields to create optimal torque.)

jcoleman02
Thu, 07/19/2018 - 08:08
Gary,
If you use an incremental encoder without halls (or commutation tracks), then the Wake&Shake feature in the drive can establish commutation.  But it does not need the index pulse.  And it does not need to rotate a full motor revolution.  Upon the first enable after bootup, it will make a series of very small movements (shake) and then calculate the commutation offset value.  While Wake&Shake works very well, it is still recommended to use halls or an absolute encoder or resolver if possible.