On a rotary application with absolute multi-turn feedback, it's possible to run over the feedback unwind. If the machine has a non-binary gear ration (e.g. 3:1), its period is not an integer divisor of the encoder period, allowing the position to not be the same after a power cycle. In other words, it may be shifted by the fraction of the ratio.

To avoid this situation the AKD Drive is capable to track and store the number of turn bits beyond the bits stores in feedback. This is made by setting the parameter FB1.EXTENDEDMULTITURN = 1. This setup secures that FB1 position (32-Bits) will always be the same after a power cycle, even in this non-binary gearbox situation.

To avoid this issue a function block has been developed. It reads the FB1.P from AKD, the number of turns is extracted and the unwinds is calculated.
Right after the network and motion engine get started, the function block is called and correct position according to the number of unwinds.

Attached is a .kas example. This uses the UDFB_AbsExtendedMultiturn applied to the Standard SFC Template, added to a step just after the routine go to running.

The function block must be called right after the network is initialized, and is ready to be used with all programing languages (ST, SFC, FFLD and FBD).

Actions made by the UDFB: 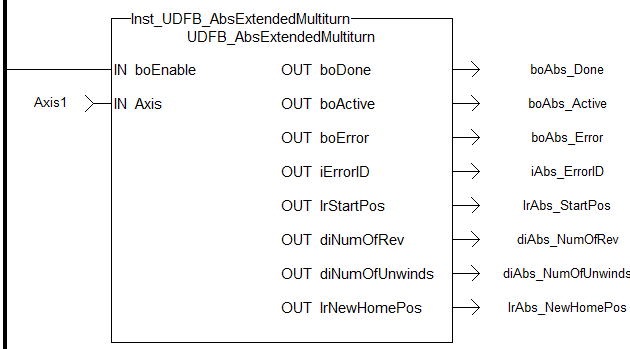