The High Performance Interface is the standard interface for SICK-STEGMANN motor feedback systems.This interface was specially developed for the requirements of digital drive control and offers the user standardised and simplified mechanical and electrical interfaces.

HIPERFACE® motor feedback systems are a mix of incremental encoders and absolute encoders and combine the advantages of both encoder types.

Initially, the absolute value is only formed when the device is powered up and communicated – via the bus- enabled parameter interface according to the RS485 specification – to the external counter in the controller which, based on this absolute value, then incrementally counts on from the analogue sine/cosine signals.

The use of highly linear sine and cosine signals achieves the high resolution needed for speed control (the arc tangent is formated in the controller). Simultaneously, however, the signal frequencies to be transmitted remain relatively low. For example: 512 periods per revolution, even at a speed of 12,000 rpm, only produce a frequency of 102.4 kHz which can be easily transmitted, even over very long  distances. 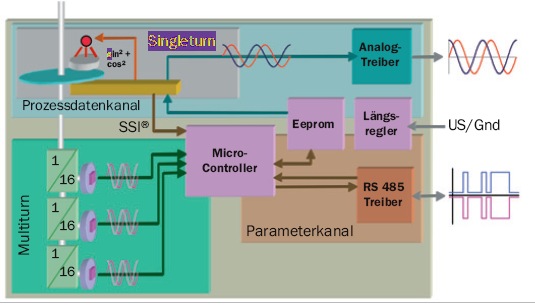 As is common for standard encoders, most motor feedback systems have an internal glass code disc as a  measuring scale . Using the direct- light method, an infrared diode maps the code pattern on the disc onto a fully customised highly integrated circuit. The characteristic feature of the SinCos® motor feedback systems now is that, in addition to  the absolute codetrack, there also is an incremental track producing sine and cosine signals.

HIPERFACE® defines the standardised electrical interface with only 8 wires:

A fully screened 8TP cable securely transmits the signals to the controller.

At first glance it seems a disadvantage  having to produce an additional, rather unusual supply of typically 8 V within the controller. This, however, ensures sufficient voltage supply to the HIPERFACE® motor feedback system even for long distances between drive and motor feedback system. More involved supplies, e.g. with sense cables, are not required.

This interface can safely be described as industry standard. The physical interface requires a 130 Ω termination resistor, two biasing resistors and a standard RS485 transceiver.

The interface is configured to 9600 baud, as standard. In principle, the bidirectional RS485 interface is bus enabled; therefore, each communication from the Master, i.e. the control, begins with the slave address. Binary data transmission minimises the transmission times. Each protocol is completed with an easy to calculate XOR checksum. The end of the protocol is detected using a timeout control. The HIPERFACE® motor feedback systems have internal diagnostic functions and signal critical or faulty conditions monitoring within the response protocol.

The sine / cosine signals are transmitted fully differentially, their amplitude varying no more than 20% in all circumstances. Since this interface determines  the actual performance of the speed controller, this part of the interface must be carefully developed.

The screen concept too is very important and has an influence on  the achievable performance of the whole system. A large area screen applied to both sides, motor and control, should achieve the best results.

There are many known methods for calculating the high resolution angle. The following method (see fig. 3) has proved a good compromise regarding code size and speed of execution: 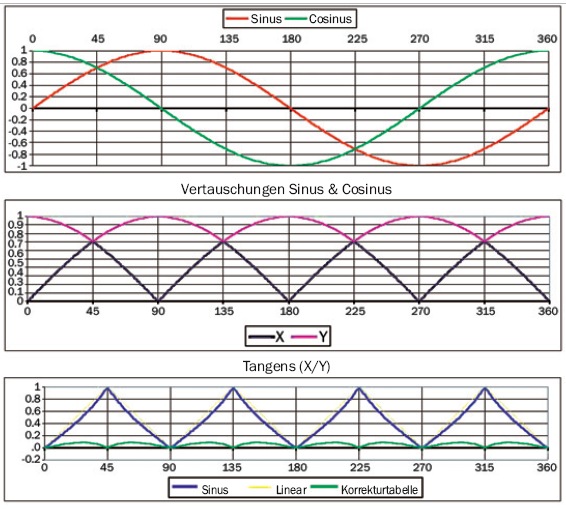 The overrun or the flanks on the various transmission paths will, in reality, never occur at the exactly identical pointin time.This can be explained by the following effects:

The synchronisation now describes a method which can compensate these effects within wide limits (± 1/2 period). This makes it possible, even at high speeds, to assign the analogue signals to a specific period. Consequently, the overlapping bits of two different pieces of position data are always oriented to the same valence,and the difference of the position values is then formed. If the two position values point to  different periods, the position value with lower resolution is corrected in the direction of the smaller difference by ± 1 period.

Matt
Wed, 02/04/2015 - 05:35
I noticed for teh AKM's there is an option for Hiperface encoders mapped for the Servostar and a seperate option for the AKD mapping.  Are you able to use the Servostart mapped version on the AKD and vice versa?  What additional setup is required if using with a 3rd party Hiperface amplifier?