FPGA Based Sin Cos Encoder Processing

High performance servo drives are still a fast growing market segment. High resolution encoders are commonly used as motor position sensing device, fig. 1. Also, most modern controllers derive velocity feedback from the position sensor. The conversion of sine-cosine-encoder signals to measure position is more and more accomplished within the encoder. Due to a digital link to the drive long cables with fewer wires do not limit the maximal signal frequency and do not reduce the feedback signal quality. 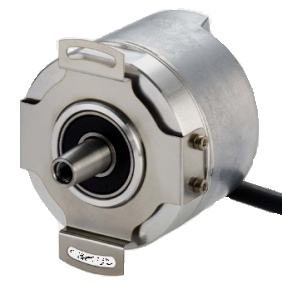 Sine-cosine encoders are an extension to standard A quad B encoders. For the manufacturers it is much easier to design optical encoders with sinusoidal signals than TTL encoders with very high line numbers.

The operating principle is that the subsequent electronics counts the sine waves and also performs tan-1 fine interpolation within one signal period, fig 2. 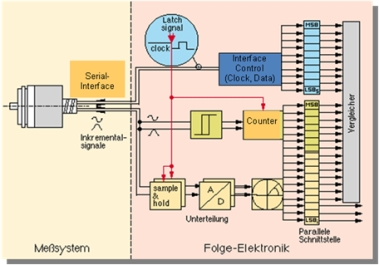 The position resolution and the position error within one signal period are the most relevant factors for fine interpolation. The selection of the encoder technology is strongly dependent on the accuracy requirements of the respective application. 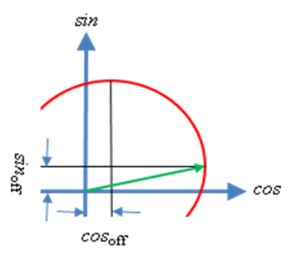 The offset and gain interpolation error depends on:

With no significant errors (Taylor approximation) the interpolation error

can be calculated by:

Using 1 Vss encoder signals rcos and rsin are ~500 mV. One percent (5 mV) offset (cosoff and sinoff) and n = 512 lines per revolution are also reasonable values. Due to a gain error rcos can be one percent greater than rsin : 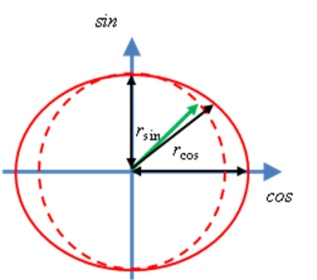 with the used offset and gain error is:

In most cases the bottleneck of the system is not the position precision. Most servo systems derive the more critical velocity feedback signal from the measured position signal with an observer:

To examine the velocity error

it is enough to derive the position error:

After some math we get an equation for the relative speed error:

Not exactly synchronous sampling of the two channels generates also an additional position error: For a mathematical analysis the cosine signal is viewed as delayed with the delay time TD. This shows the same behavior like sampling the cosine signal TD earlier compared with the sine sampling time. This is degenerating the circle to an ellipse with 45° rotated axis, Fig. 5. 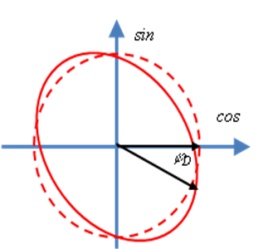 the delay time generates a speed proportional phase shift of the cos signal:

And a velocity error:

And also a one percent (high speed) velocity error:

Looking at these equations we conclude:

ADC based offset and gain errors do not need a separate review. These errors are handled together with the analog encoder offset and gain error. With a 12-bit analog to digital converter (industry standard) the quantization noise is about ±0.05 % (100 % / ±2048). There are two ways to reduce this noise:

Due to the noisy environment inside a servo drive the use of a higher resolution ADC is not trivial. Setting a low pass filter is more or less not possible because of the high frequency encoder signals (>250 kHz).

Usually the encoder position is required with the feedback loop update frequency:

Sampling itself is also an important issue. If the encoder frequency is near or higher than the sampling frequency the speed error amplitude is damped to a lower value with a different frequency (aliasing), fig 6. 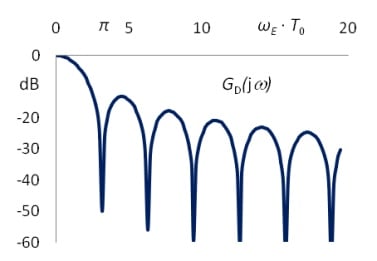 The position error is not affected by the sample time.

If the system is powerful enough to process the encoder signal several times within one servo loop update time the quantization noise can be significantly reduced by Oversampling, Fig. 7.

Oversampling by utilizing flash ADCs and FPGA based digital signal processing with a sampling rate of 16 MHz and more is realistic. Fig. 7 shows the block diagram of a third order velocity observer. The position j is calculated with an update rate of 16 MHz. This position is compared with the estimated observer position

. The difference is used as observer feedback signal. In fact the observer is acting like a low pass with minor phase lag if the acceleration

By setting this low pass cut off frequency to 50 kHz (with a0 , a1 , a2) the quantization noise can be reduced by approximately 20 dB:

This boosts a 12-Bit ADC up to 15-Bit SNR performance. Another option is to use the DSP capability of the FPGA to execute an on-line offset and gain adjustment.

Due to the Oversampling technique the Kollmorgen S700 Servo Drive is offering outstanding performance in processing analog sine cosine signals {2}.

The bidirectional digital sensor interface standard BiSS provides communication between position encoders or measuring devices and industrial controls, such as a drive control, for example. BiSS is based on two unidirectional RS 485 channels with baud rates up to 10 MBaud.

The BiSS protocol classifies each subscriber in one of the following data sections: sensor data, multi cycle data or register data. Using the digital communication as a bidirectional service data channel (BiSS Register-Mode) the drive manufacturer can read an electronic type plate to configure the drive within an auto setup process. In this mode the clock is PWM modu­lated to transmit data from the control unit to the encoder.

Using the digital communication as a fast process data channel (BiSS Sensor-Mode) the encoder will provide a high resolution position signal and additional alarm and warning bits with high update rates. A motor winding over temperature signal could be mapped into the alarm bit for example. Via the optional Multi Cycle Data (MCD) channel the position sensor can send sequential low update rate information, like encoder temperature.

The servo drive manufacturer design engineer gets a proved ready to use solution with well known specifications by using a specific BiSS master chip. The disadvantages are the high component cost for the BiSS master and the necessary PCB-space {4}. 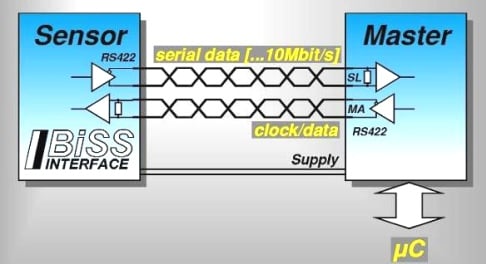 DRIVE-CLiQ, the Siemens standard digital interface between the essential SINAMIC S120 drive components including motors and encoders reduces the number of different parts. Electronic type plates in the components allow all of the drive components to be automatically detected via the Drive-CLiQ cable.

It is used to connect a motion controller with several servo drives and also to connect the drives with the motor build in feedback device. It is a non standardized closed system based on fast (100 MBit) Ethernet with a 24 V feedback power supply extension. Fastest position update rate is 31.25 µs. Electronic type plate functionality is available. Analog signals are not supported. Until now Siemens is not interested in opening the DRIVE CLiQ interface specification to third party industrial controls or motor manufacturers. 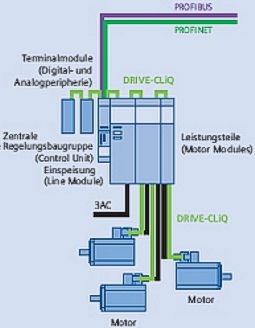 The EnDat interface from HEIDENHAIN is a digital, bidirectional interface for encoders. It is capable both of transmitting position values from incremental and absolute encoders as well as transmitting or updating information stored in the encoder, or saving new information. EnDat is based on one unidirectional RS485 clock channel and one bidirectional data channel. The data is transmitted in synchronism with the clock signal from the subsequent electronics. The type of transmission (position values, parameters, diagnostics, etc.) is selected by mode commands that the subsequent electronics send to the encoder.

With EnDat 2.2 the use of the analog signals is not necessary due to the much faster communication. That saves several wires of the feedback cable. The fastest position update rate is below 18 µs. 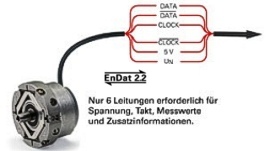 MAZeT is also offering a commercial soft-macro (IP) of the EnDat 2.2 interface. It describes the control side part (also referred to as the master component) of the interface between an absolute position encoder from HEIDENHAIN and a user’s subsequent electronics {9}.

Is the short for High Performance Interface and the standard interface for SICK-STEGMANN motor feedback systems.

This interface was also developed for the requirements of digital drive control and offers the user a standardized and simplified electrical interface. 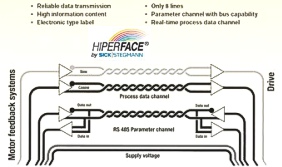 A fully screened 8TP cable securely transmits the signals to the controller. The protocol is handled with a standard (RS232) UART, as implemented on almost all popular microcontrollers/DSPs. The interface is configured to 9600 baud, as standard. Each protocol is completed with an easy to calculate XOR checksum. The end of the protocol is detected using a timeout control.

A full digital SICK-STEGMANN interface is under development. HIPERFACE DSL is planned to be available in two interface versions:

Detailed technical data is not published until now. HIPERFACE DSL is planned to be available in 2008.

There is no microcontroller on the market which can support industrial digital encoder interfaces. No drive Manufacturer is willing to use several dedicated integrated circuits to interface different encoders. Siemens for example supports only their company internal DRIVE CLiQ. However BiSS and EnDat can be easily implemented in a standard FPGA with RS485 drivers {5}. HIPERFACE DSL is probably also a candidate for an FPGA solution using the same hardware.