A servo system capable of controlling velocity and torque in both positive and negative directions is known as having "four-quadrant" operation (see diagram below). 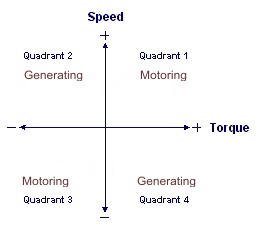 Operation in quadrants 1 and 3 is defined as "Motoring," meaning that speed and torque are in the same direction (both positive or both negative). This typically occurs when a system is driving a load and power is being consumed by the motor.

Quadrants 2 and 4 are defined as "Generating" (sometimes called Regenerating), meaning that speed and torque are in opposite directions (one negative and one positive). Generation occurs when the torque of the motor is opposing the direction of rotation and the motor is generating electrical energy. This energy can either be given back to the mains voltage (regenerate energy) or transferred to heat in a brake resistor or stored in capacitors (see KCM Capacitor Module). 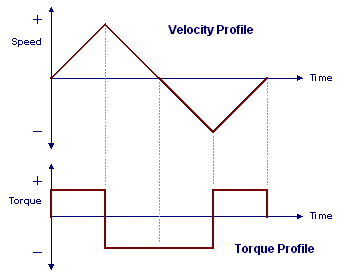 Assuming a frictionless system, the figure above depicts a typical motion profile and its relationship to motor torque. Each segment of the profile can be assigned to a specific quadrant.

The first segment shows the motor being accelerated with speed and torque both being positive. Thus, the system is operating in Quadrant 1.

In segment 2, the motor is being decelerated. Speed is still positive. However, torque is negative, which brings the motor to a controlled stop. This is consistent with operation in Quadrant 2.

Segments 3 and 4 exhibit the same properties as segments 1 and 2 with motor rotation being in the opposite (negative) direction, thus placing them in quadrants 3 and 4 respectively.