Quick recap form our last post: In 1948, the company called Inland was formed by an out-of-work immigrant whose net worth was approximately $4000. Six employees ran the facility in the basement and garage of the Unruh home. The company's first employee, Tom Bain, described conditions there as "quite crude". He recalls the cold triple garage and the problems posed by a leaky basement after a spring rain. Just about a year later - Hugo moves to Pear River and by 1957, the plant is bursting at the seams with 60 employees and a growing workload. Now let's continue…

Kollmorgen Electro Optical is now flourishing in North Hampton, MA, and Hugo decided it was time to move out of his garage shop environment in New York and head south. The story goes that Hugo and his wife enjoyed vacationing in the south, and just prior to the interstate system, it was a great adventure traveling through the back roads and byways of the eastern seaboard. Traveling down Route 11 from New York would take one through the New River Valley, near VPI, the Arsenal, and through the quaint town of Radford, Virginia. As Hugo's business grew in Pear River, he needed to think about expansion. Real estate, taxes and high interest rates pushed Hugo to look elsewhere to take the next step. As the new interstate system expanded through Southeast Virginia, through Roanoke connecting the north and south, the idea of moving his company to Radford began to make more sense. An old textile mill had recently lost its tenants, and the town was eager to bring in new industry. Hugo felt good about the people of Radford, and was impressed with the hospitality of businessmen like Ott Giesen and Dan DeVilbiss, who worked to attract Hugo and Inland Motor to Radford. A good railroad system, connections to interstate trucking lines, two area colleges providing a source of technical talent, and the right building space opened the door for Inland Motor to relocate from Pear River NY to Radford, VA in 1958. 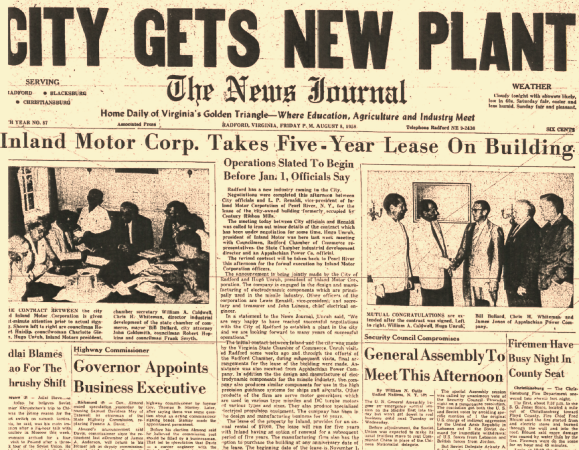 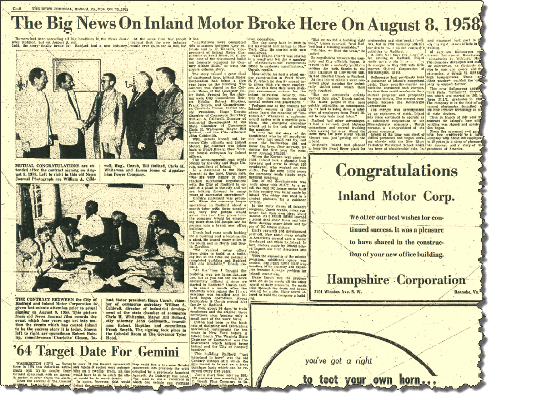 Inland had expanded its business in several directions, adding a division focusing on motor generator sets. Its core product, torque motors, still was the fastest growing and core of the business. The post WWII need for periscopes continued, keeping Kollmorgen busy as well. Given the strategic importance of the relationship with Inland, it became very apparent a merger was in store. The broad capital base of Kollmorgen, combined with the reputation of Inland Motor lead to a deal in May of 1960. In Radford, Inland continued supplying motors to the Aerospace and Defense markets, represented in missions from satellites to the Apollo moon landings.

Hugo Unruh had been lucky, in the sense that preparation and resourcefulness had met with the unique opportunities afforded by the dawning space age. But in addition to being lucky, he had been smart - both in the concepts he embraced, and in the choice of associates who could match his creativity and enthusiasm. Their hard work was to bear fruit in ways they could scarcely imagine. In 1960, the company celebrated its first million-dollar year! 50 plus years later, Kollmorgen embraces that same philosophy - The Best Team Wins, and continues to innovate new product ideas , like the AKMH hygienic servo motor design, for emerging needs of the industries we serve.