Meeting the ‘got milk?’ challenge in Europe's dairies

Some years ago, a popular U.S. campaign reenergized the consumption of cow's milk. The "Got Milk?" campaign ran from October 1993 to February 2014 and has been accredited for greatly increasing California milk sales. In Sweden, heads were nodding at Europe's second largest diary company, Arla Foods; they knew they needed to "get milk" from production to storage in a more efficient manner.

In 2004, Arla Foods needed to make a decision. Their conveyor system was no longer up to the task of transporting dairy products from production to chilled storage. At the time, management decided to introduce manual warehouse trucks. Initially, Arla Foods operated five trucks two shifts a day for nearly four years; one truck was added later.

An active decision to improve efficiency

The decision to replace the six manual trucks with automated guided vehicles (AGVs) was made in 2009. The "new" trucks ran the same two shifts a day, now without operators. Two more AGVs were added later, and all eight were in use even as Arla Foods initiated the close of its Gothenburg, Sweden operations in 2013.

The new home of the eight AGVs was the Arla Foods dairy center in Falkenberg, Sweden. The ease of relocating to this facility demonstrated the versatility, expandability and flexibility of AGVs. Today, these eight machines function effortlessly, three shifts a day.

The introduction of AGVs in Arla Foods' operations in Götene, Sweden, is a prime example of AGV expandability. When management decided to employ the use of AGVs, they used a stepped approach. AGVs were introduced into different transportation processes in three steps. By the end of the project, a total of nine AGVs were installed; Arla Foods realized return on investment after two years.

Getting milk to 6M people

Finally, Arla Foods' distribution operations in the U.K. uses AGVs to move over 1.5 million liters of milk every day. In this custom-designed "refrigerator," 90+ state-of-the-art AGVs transport milk from the filling stations to dispatch, each one travelling more than 15km a day. This dairy delivers milk to nearly six million inhabitants in the counties of Greater Manchester, Somerset and West Midlands.

To find out more about how AGVs can meet your "got milk" challenges, speak with one of our automation specialists and read one of our success stories. 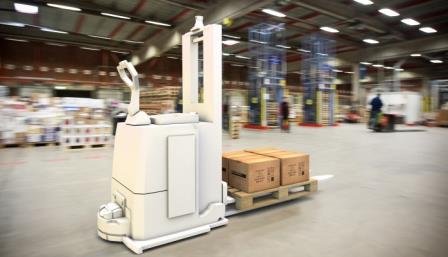 Unleash the power of lift trucks – with automation

Most warehouse managers rely on manual movements of goods and parcels with lift trucks. Turning...

Catch the future while you can

The fourth industrial revolution is taking place in factories worldwide. Catch the future while...

Making AGVs thrive in your plant